The Last of Us is a horror survival video game released by Naughty Dogs in 2013. In the game, players control the story’s protagonist, Joel, through a post-apocalyptic world of maze-like buildings and richly detailed urban and rural neighbourhoods while passing through dangerous threats that include both various types of the infected, cannibalising undead creatures, and gangs of heavily armed and depraved humans. (Bishop, 2015) The storyline of the game tells a tale of how Joel escorts a girl immune to the infection, Ellie, to a team of doctors so that they can investigate her immunity in the hopes of developing a cure. However, when Joel and Ellie arrive at the hospital, Joel finds out that the doctors must kill Ellie to proceed with creating a cure and so he kills them. As a player, aside from empathising with Joel, one would usually feel conflicted about his decision as well. On the other hand, someone else who has not engaged much with the game, would probably condemn Joel for bring a mere selfish survivalist for sacrificing the greater good without much hesitation. Although that might be true from an objective point of view, I would like to implore that in a post-apocalyptic world, the circumstances are different and seek to redefine what it means to be a moral human. As such, such a judgement of Joel would no longer apply, and deeper consideration should be given before concluding a judgement of his actions.

Firstly, in the post-apocalypse, morality, constructed by the society, has shifted in accordance to the lack of moral institution to enforce them and the way people choose to live in this new environment and acts condemned as immoral during pre-apocalypse no longer hold true in the post-apocalypse. Immoral acts such as merciless killing of humans or stealing from others have become accepted in the post-apocalyptic world of The Last of Us which is attributed to the lack of moral institutions and aggravated by survivors themselves. One of the biggest difference of the post-apocalyptic world of The Last of Us as compared to that of the pre-apocalyptic world is the lack of law enforcement and this, gives the survivors a chance to show their worst behaviour, which many of them choose to do so in the name of survival. In the game, Joel and Ellie meet many adversaries on the road to the doctors other than the undead. One of them is a group of cannibals lead by a man called David who attempted to recruit Ellie for his own perverse desires. Other human groups that Joel and Ellie had to fend off include bandits and hunters who either attack or trick them for their resources with the aim of killing them afterwards. With the lack of a higher authority to restrict their actions, survivors take advantage of their ability to act freely while compromising the needs of others. More importantly, by doing so they complicate the living conditions of their victims by forcing them into the ways of their perpetrators. In the story Ellie kills David by repeatedly stabbing him out of her fear of him possibly raping, killing and even eating her while crying in her act. The act of mirroring the morals of the more inhumane survivors, albeit unwanted, is also shown to be quickly accepted into the post-apocalyptic world because of the importance of it, where survivors act in self-defense. We see that in the start of the journey Ellie, despite being only fourteen, is very much keen on being part of the action as she constantly requests for a gun. Although this may be seen as being merely childish but the fact that Ellie kills a bandit in a split second to save Joel shows that she is actually serious about using arms for survival and understands the need for it. Furthermore, as the story progresses, Joel who initially declines to give Ellie a gun, becomes the one who hands her a rifle and teaches her how to use it when the need for it arises. Joel teaching Ellie how to shoot with a rifle

The gradual acceptance of this need and acting upon it with acceptable dissonance afterwards shows how the survivors of this new world has come to a consensus with it. As such, with both the victims and perpetrators arriving at similar levels of willingness to fight, without explicitly defining it, the world has become governed by the principle of “the survival of the fittest” where only the stronger, faster and smarter individuals will prevail. This further highlight how those who have yet to succumb to immoral tendencies are evidently left choice-less when choosing whether to commit an immoral act because they must do it to save themselves.

“The gradual acceptance of this need and acting upon it with acceptable dissonance afterwards shows how the survivors of this new world has come to a consensus with it.”

The post-apocalyptic state of The Last of Us also forces survivors to take on a survivalist attitude which is accentuated by the absence of pre-apocalyptic society. In the game, civilized society has collapsed, and people have lost their purpose as individuals of a larger functioning system. Most survivors no longer have legitimate jobs and mostly take on unstable roles such as being a protector or leader of a gang or non-hostile community. According to William’s analysis of the The Walking Dead, in that world, “individual purpose and meaning cannot be found through any a priori construct or defining principle” and “can only be actualized through the individual will and the choices made by that will” (William, 2018). Much like characters in The Walking Dead, those in The Last of Us create individual purpose and meaning through the individual will to replace the absent external structures that used to provide it. As previously mentioned, the individual will is mostly dependent on survival, thus, the natural instinct of self-preservation becomes the new meaning in people’s life. This result is also reinforced by the lack of pre-apocalyptic reminders as we see how pre-apocalyptic life is forgotten in the daily life. In the game, Ellie finds a diary of a teenage girl written before the apocalypse and she expresses how she finds what girls did at that time as bizarre, because of how unimportant they sound. Although, it has been 20 years since the apocalypse, which means that fourteen-year-old Ellie would have never known the pre-apocalyptic world but the fact that she could no longer relate to how life was then shows how different it is now. As a survivor, too much focus has been placed on surviving, with good reason, to care and preserve the practices of the past. The lack of pre-apocalyptic reminders comes from the huge change in man-made structures as the game presents highways with unused cars and crumbling old buildings, all of which have been taken over by vegetation. 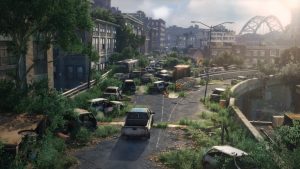 A view of the world of The Last of Us

Without which, it leaves little to remind survivors of the pre-apocalyptic times when living involves more than survival. Hence the memory of pre-apocalyptic life fades slowly with time with its lack of relevance to the conditions of the current world, giving survivors more reason to fully accept the new way of life, survival, plainly presented to them.

Since pre-apocalyptic morality no longer stands, The Last of Us also calls for a redefinition of what it means to be human. The circumstances mentioned above shows that survivors are sometimes forced to be something they are not which is also reinforced by their physical environment. As such, the moral framework in which we live by now is unable to provide a fair judge of the actions of the characters in the game. To discuss the redefinition, I would like to analyse Joel’s act of sacrificing humanity’s last hope to save his subjugate daughter, Ellie. 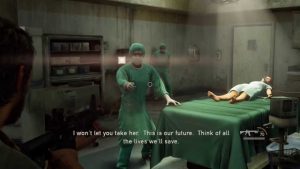 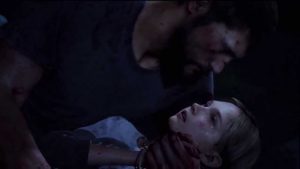 Firstly, it is good to note that Joel used to have a daughter whom we see at the very start of the game but dies at the start of the apocalypse. Joel is haunted by the pain of losing his daughter for a long time even up till his meeting with Ellie as he initially treats Ellie coldly to prevent any connection to form between them. In Ellie, he regains the ability and confidence to love someone else, making him human again as he starts making decisions beyond selfish reasons, while carrying the fear of losing them. However, as a survivalist as well, Joel is clear to set his boundaries to ensure both Ellie and his survival, and perhaps prioritises Ellie’s more than his.

Joel’s action on the surface is seen to have been callous and selfish but his flaw in prioritising Ellie, whom he loves as his daughter, makes him inherently human as humans are flawed by nature. Being human here is pretty similar to that of the pre-apocalypse, where one would do anything for their loved ones. But upon scrutinizing on the detailed actions that he performs throughout the game, such as, brutally torturing David’s followers to find out where David has taken Ellie to before killing him, it puts Joel in a questionable light. We see that in the heat of looking for Ellie, Joel shows no hesitation and ensures the efficiency of his work, he uses means that are terrible portraying him as inhumane but does it for something that is morally good. When looking through the lens of how morality has shifted in this new circumstance, Joel can be seen as being justified and his humanity is retained for the compassion he shows to another being. What it means to be human can thus be redefined with the use of the new circumstances in placed by the remaining survivors.

In conclusion, many actions in the last of The Last of Us deserve a second consideration because of the vast difference between the post-apocalyptic and the pre-apocalyptic. Firstly, the difference in morality frame, determined by the survivor’s actions, and secondly, the physical environment that is being portrayed in the game. Morality in the games is thus complicated even more so than in the pre-apocalyptic times. In addition, through the new frame of morality, unanimously established among the survivors, a new definition of being human can be created to judge survivors of this world upon.