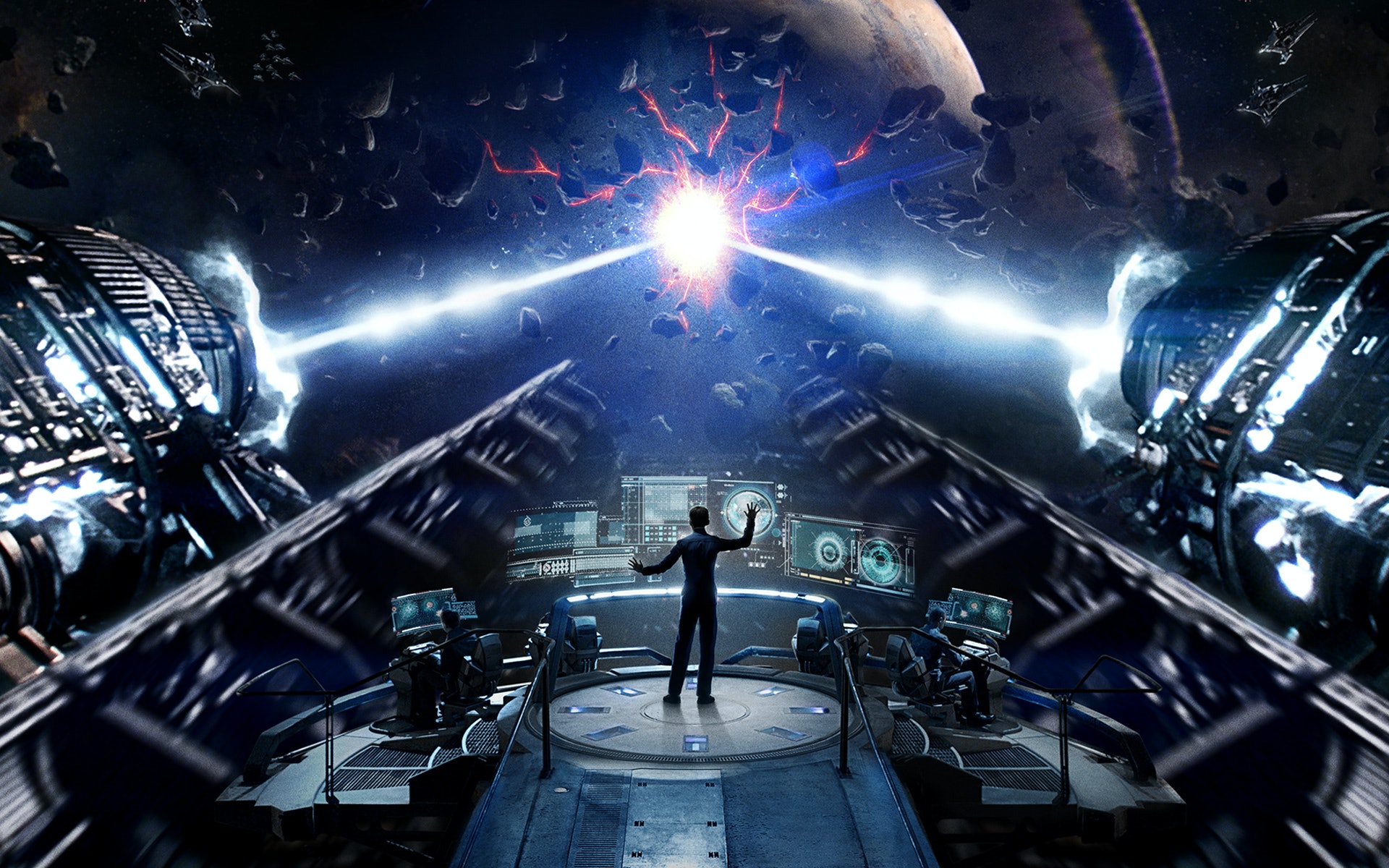 The 1980s saw the emergence of the very first simulation games, made possible by the use of texture wrapping to create pseudo 3D environments (Thomson, 2008). Since then, the industry has flourished, and technology has allowed for the creation of increasingly complex simulations including popular titles such as The Sims, Second Life and Spore. The proliferation of simulated media has led to significant academic discourse surrounding the potential for the simulation to disturb or even supplant the real. Notably, Baudrillard theorises that there are three orders of simulacra. In the first order, the “image is a clear counterfeit of the real”. In the second, “distinctions between the image and the representation begin to break down”, but it is still possible to “access the hidden fact of the real”. The third order of simulacra erases “any distinction between reality and its representation; there is only the simulacrum”. In order words, the “representation precedes and determines the real” (qtd. in Felluga, 2011).

Ender’s Game, a 1985 science fiction novel by Orson Scott Card, is unique in its prescient exploration of the relationship between reality and simulation through the medium of video games. The book focuses on the conflict between the Formics alien race and humans, who have united to form an International Fleet (IF) for the war. A large part of the story takes place in the Battle School, an orbiting military academy designed to produce exemplary commanders by training children from the tender age of six. In order to prepare the children for war, a series of video games are introduced into the school curriculum.

Interestingly, the virtual worlds of the games appear to converge with reality on many occasions. For example, the protagonist’s thoughts about other characters are appropriated by a game in its creation of in-game features, which results in an overlap of reality and fantasy. In addition, the climactic battle of the story is at first believed to be a game, but turns out to have been the real war. In both cases, the simulation appears to “precede and determine the real” (qtd. in Felluga, 2011), for it informs the psychology and behaviour of the players, which ultimately contribute to the reality they inhabit. The elevation of in-game virtual reality to a status equivalent to, perhaps almost surpassing that of, the “real world” raises questions about the book’s portrayal of the relationship between reality and simulation.

In this article, I explore how the convergence of reality and the virtual worlds of games in Ender’s Game highlights the potential for simulations to both obfuscate and supplement the real. Specifically, the games threaten to supplant the real by misrepresenting or selectively representing it. This creates a warped reality that changes the player’s perceptions of the real. On the other hand, the simulation also demonstrates the capacity to supplement the real by revealing hidden facets of it – for instance, the player’s internal reality is examined by the virtual environment of the game. In the following paragraphs, I will examine two games relevant to the discussion: the mind game and the interstellar battle simulations.

Supplanting of the real by a simulated reality

The climax of the story occurs during a battle on a simulator in Command School, not long after Ender graduates from Battle School. The simulator displays interstellar battles in holographic form and allows players to issue instructions to their own starships via a microphone. Believing the simulation to be just another game, Ender commands his fleet to detonate humanity’s most powerful weapon on the enemy planet, reducing it to a clump of debris in space. A major plot twist follows as the teachers reveal that the game was not a game at all; Ender had won the actual Formics war. The teachers had intended all along to trick him into thinking that the simulation was a game so that he would not approach it with the same mindset as with actual war. Thus, the simulation became a tool for the obscuring of truth and reality.

I refer to Baudrillard’s concept of the “hyperreal” to explain how the simulation threatens to supersede reality. Baudrillard posits that the “emergent culture of simulation” makes it such that “reality is giving way to hyperreality – that which is more real than the real” (qtd. in Gane, 2006). When confronted with the hyperreal, the viewer loses the ability to distinguish reality from the simulation of reality. It is this creation of the hyperreal that detaches Ender from the realities of warfare – his decisions are instead based on the constructed reality of the simulation.

While commanding battles on the simulator, Ender perceives them to be “pure contests of strategy and force” (Elkus, 2006, p. 3). War is abstracted to simple win-lose scenarios without any serious consequences, unlike in reality, where there are numerous ethical and philosophical considerations. This causes Ender to adopt a mindset that is focused on winning the “game” regardless of the cost. As the teachers themselves acknowledged, Ender “had to be a weapon… functioning perfectly but not knowing what [he was] aimed at” (p. 230). If he had known the truth, he would have hesitated to sacrifice hundreds of human pilots and wipe out the Formics species for the sake of mankind’s victory. The fact that the teachers used the simulation to deceive Ender points to its potent capacity to obfuscate the realities of war.

This can be explained by the simulation’s tendency to selectively represent the real, leaving out elements deemed unnecessary for its purpose. For instance, death is one aspect that the simulation fails to fully represent. Der Derian (2000) states that the virtualisation of war gives it “an unsurpassed power to commute death, to keep it out of sight, out of mind”. This creates “a high risk that one learns how to kill but not to take responsibility for it, one experiences ‘death’ but not the tragic consequences of it” (Der Derian, p. 3). In the constructed reality of the simulation, enemies are an endless stream of computer-generated pixels that can be revived ad infinitum; there is no real death.

Similarly, the simulation fails to capture the complex identities belonging to individuals in reality. The interstellar battle simulators in Ender’s Game have objectified the enemy by reducing them to simplified avatars on the screen, nothing more than targets for practice. In the simulations, the player’s starships are represented by “tiny light[s]” and “the enemy [is] another light of a different colour” (p. 199). Enemies in the game are “generic”, “homogenous”, “not given individual names, let alone personalities” (Hitchens et al., p. 8). Thus, the Formics controlling the enemy starships have been stripped of their identities—the player cannot see them as more than little points of hostile lights to be exterminated. In such a situation, there is no need for compassion or mercy. It is likely that this mindset contributed to Ender’s decision to blow up the alien home planet, a simple action which claimed the lives of billions of Formics. Therefore, the simulation is shown to obfuscate and even supplant reality by portraying a skewed representation of war, and changing its eventual outcome.

The ability of simulations to supplement reality

Despite highlighting the potential for simulations to obscure the real, Ender’s Game also suggests that they can enhance one’s understanding of reality by revealing previously hidden aspects of it. This is seen in a video game that Ender plays in Battle School, called the mind game. Described only as “Free Play” (p. 50) in the students’ digital tablets, the mind game consists of a fantasy world full of obstacles that are spontaneously generated as the player navigates through the landscape. The highly advanced computer algorithm is able to adapt itself and make inferences about the player’s psychology based on their in-game actions. A convergence between reality and the game is observed when the computer appropriates elements from Ender’s most private thoughts for the creation of in-game features; this enables the simulation to uncover previously hidden dimensions of reality.

“[t]he nature of the virtual is that it can be acted upon as though it were real, and it therefore calls into question… assumptions about one’s own identity”

The mind game, by drawing upon elements from the player’s private life, provides clues to their notions of self. As described by Lasko-Harvill (1992), “[t]he nature of the virtual is that it can be acted upon as though it were real, and it therefore calls into question… assumptions about one’s own identity” (p. 223). Specifically, the mind game reveals how Ender is torn between his peaceful nature and the merciless killer he is required to be as a soldier in Battle School. This internal conflict is explored when his avatar encounters several uncannily familiar enemies. In one scenario, Ender brings his character into a playground full of children, who later metamorphose into “a dozen slavering wolves with human faces” (p. 56). Ender’s character is repeatedly eaten by the wolves until he manages to get rid of them by dragging their bodies into an acidic brook. There is a clear parallel between the wolves at the playground and the children in the Battle School who are often hostile towards him, sometimes to the extent of threatening his life. Ender’s decision to kill the wolves thus signifies the part of himself that is capable of brutal murder. Yet, the game also brings out another part of his identity, one that simply desires a normal life free from the constant struggle to survive in Battle School. This is seen when Ender’s character reaches a place called “The End of the World” and he reflects that: “Perhaps it’s called the end of the world because it’s the end of the games, because I can go to one of the villages and become one of the little boys working and playing there, with nothing to kill and nothing to kill me, just living there.” (p. 58)

In addition, the mind game serves as a bridge to the truth, and thus illuminates reality, when it facilitates understanding between humans and aliens. This is reinforced by the blurring of boundaries between the real and the virtual. After the war, Ender stumbles upon an area that closely resembles what he saw in the fantastical landscape of the mind game. He realises that it was built by the Formics before they perished in the war, in an effort to communicate with him, for they spoke to one another via mental images instead of words. When he explores the area, he finds a cocoon belonging to the last remaining Formic hive queen in a place that only he would know. It is then that he discovers the hive queen’s desire for peace and the aliens’ regret for their invasion of Earth (pp. 244-248). Interestingly, there has been a “precession of simulacra” and “[r]eality itself has begun merely to imitate the model” (qtd. in Felluga, 2011). Yet, instead of obfuscating the real, in this case the simulation reveals another dimension to reality by bridging the gap in understanding between Ender and the aliens.

In summary, Ender’s Game portrays a convergence between reality and the virtual worlds of video games. This is observed in the mind game and the interstellar battle simulations, both of which demonstrate a capacity to influence and inform the real. The novel suggests that simulations of war can obscure the real by constructing a warped reality that changes the player’s attitudes towards warfare, as evidenced by Ender’s treatment of the final battle against the Formics. Yet, the simulations also enhance one’s understanding of reality by providing a glimpse into the player’s internal reality – which consists of their notions of self and identity – and bridging the gap between humans and the aliens.

Back to main journal site